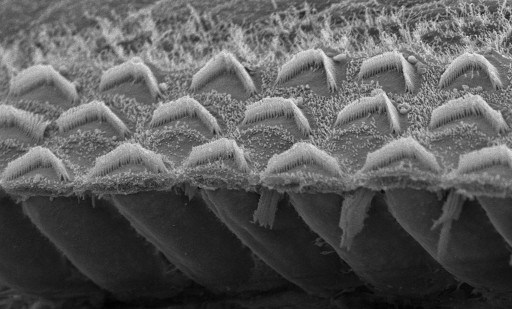 The inverted V’s above are sensory hair bundles in the ear, each containing 50 to 100 microvilli tipped with TMC proteins. Gene therapy restores hearing by providing working copies of those proteins. (credit: Gwenaelle Geleoc & Artur Indzhykulian).

Patients with hearing loss will one day have their genome sequenced and their hearing restored by gene therapy, says Jeffrey Holt, PhD, a scientist in the F.M. Kirby Neurobiology Center at Boston Children’s Hospital and an associate professor of Otolaryngology at Harvard Medical School.

A proof-of-principle study published by the journal Science Translational Medicine takes a step in that direction, restoring hearing in deaf mice. Clinical trials of gene therapy for humans could be started within 5 to 10 years, Holt believes.

Holt, with first author Charles Askew and colleagues at École Polytechnique Fédérale de Lausanne in Switzerland, focused on deafness caused by a gene called TMC1 — one of more than 70 different genes are known to cause deafness when mutated. TMC1 accounts for 4 to 8 percent of genetic deafness, and also encodes a protein that’s critical for hearing by helping to convert sound into electrical signals that travel to the brain.

To deliver the functioning TMC1 gene into the ear, the team inserted it into an engineered virus called adeno-associated virus 1, or AAV1, and added a promoter, a genetic sequence that turns the gene on only in certain sensory cells in the cochlea, known as hair cells.

They then injected the engineered AAV1 into the inner ears of mutant, deaf mice modeling the more common recessive form of TMC1 deafness, which causes profound hearing loss in children from a very young age, usually by around 2 years. After the injection, the animals’ sensory hair cells began responding to sound and electrical activity began showing up in the auditory portion of their brainstems.

How it worksHolt’s team showed in 2013 that TMC1 and the related protein TMC2 are critical for hearing, ending a rigorous 30-year search by scientists. Sensory hair cells contain tiny projections called microvilli, each tipped with a channel formed by TMC1 and TMC2 proteins. Arriving sound waves wiggle the microvilli, causing the channels to open. That allows calcium to enter the cell, generating an electrical signal that travels to the brain and ultimately translates to hearing.

Although the channel is made up of either TMC1 or TMC2, a mutation in the TMC1 gene is sufficient to cause deafness. However, Holt’s study also showed that gene therapy with the TMC2 gene could compensate for loss of a functional TMC1, restoring hearing in the recessive deafness model and partial hearing in a mouse model of dominant TMC1 deafness, in which patients gradually go deaf beginning around 10 to 15 years of age.

Abstract of Tmc gene therapy restores auditory function in deaf mice. Genetic hearing loss accounts for up to 50% of prelingual deafness worldwide, yet there are no biologic treatments currently available. To investigate gene therapy as a potential biologic strategy for restoration of auditory function in patients with genetic hearing loss, we tested a gene augmentation approach in mouse models of genetic deafness. We focused on DFNB7/11 and DFNA36, which are autosomal recessive and dominant deafnesses, respectively, caused by mutations in transmembrane channel–like 1 (TMC1). Mice that carry targeted deletion of Tmc1 or a dominant Tmc1 point mutation, known as Beethoven, are good models for human DFNB7/11 and DFNA36. We screened several adeno-associated viral (AAV) serotypes and promoters and identified AAV2/1 and the chicken β-actin (Cba) promoter as an efficient combination for driving the expression of exogenous Tmc1 in inner hair cells in vivo. Exogenous Tmc1 or its closely related ortholog, Tmc2, were capable of restoring sensory transduction, auditory brainstem responses, and acoustic startle reflexes in otherwise deaf mice, suggesting that gene augmentation with Tmc1 or Tmc2 is well suited for further development as a strategy for restoration of auditory function in deaf patients who carry TMC1 mutations.