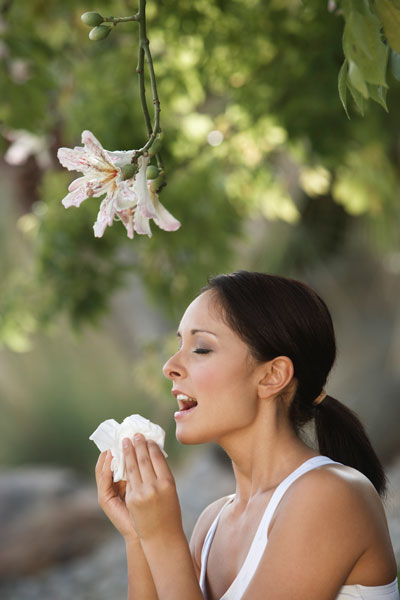 Unlike hay fever, an allergen-related illness, nonallergic rhinitis isn’t triggered by pollen, mold or dander. It can be caused by infection, hormones and even food and drink. Some causes can also include: dust, smoke, chemicals, humidity changes, spicy foods, alcohol, stress and pregnancy. Symptoms include runny nose, sneezing and stuffy nose.

These types of rhinitis are similar in presenting symptoms so oftentimes your doctor will want an allergy skin and blood test to diagnose the problem. There are no specific tests to conclude someone really has nonallergic rhinitis. Therefore your doctor will try to listen to your symptoms and rule out other causes before proceeding with a treatment plan for this diagnosis. Your doctor may recommend nasal sprays and oral decongestants. He or she might also recommend lifestyle changes such as avoiding triggers like wood-burning stoves, household chemical sprays and scented perfumes. Performing nasal irrigation at home alongside the use of a humidifier might also be an option.

The dilation of blood cells that inflame your nasal tissue is often an unchangeable genetic trait so prevention can be difficult. The best advice is to avoid known triggers, stay hydrated and don’t use nasal decongestants too much because your symptoms and susceptibility might actually worsen.