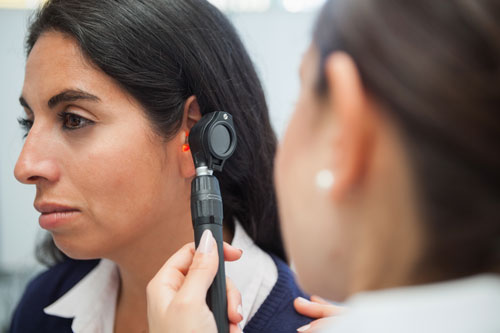 Cholesteatoma is common condition that can affect the ear. A cholesteatoma is essentially an invagination of skin into the middle-ear and mastoid. Although this is a benign condition, the skin sac can cause erosion of the ossicles resulting in hearing loss and can progress to erode important structures within the ear including the facial nerve canal, inner ear, and skull base. The most common symptoms that occur are hearing loss as well as chronic drainage from the ear, particularly if the cholesteatoma has become infected.

Cholesteatomas are surgically removed by an outpatient procedure known as tympanoplasty with mastoidectomy. Very large or recurrent cholesteatomas may necessitate a “canal wall down” mastoidectomy in which the ear canal and mastoid bone behind the ear are surgically connected to create a space which can easily be inspected in subsequent office examinations. Tympanoplasty refers to reconstruction of the ear drum as necessary to replace the diseased portion of the native ear drum. Reconstruction of the ossicles may also be required if the ossicles have been eroded by the cholesteatoma. In cases of large cholesteatomas, a second-look operation is scheduled 6 -9 months later to ensure that there is no recurrence of the cholesteatoma. The primary goal of the tympano-mastoidectomy operation is to create a safe, dry ear with the secondary goal being restoration / preservation of hearing.

Otosclerosis is a condition affecting the temporal bone with clinically detectable hearing loss in about 1% of Caucasians. Asians, Blacks, and Native Americans have a much lower incidence of otosclerosis. There is a genetic component to this condition. Most commonly, it results in fixation of the stapes bone in the middle-ear resulting in a conductive hearing loss. This type of hearing loss is surgically correctable by a procedure known as stapedectomy, in which the stapes bone is replaced with an artificial prosthesis. A stapedectomy is performed as an outpatient procedure under general or local anesthesia in approximately one hour. Primary stapedectomy has a greater than ninety-five percent likelihood of a significant hearing improvement to normal or near-normal levels. Patients are typically able to return to their routine activity within two weeks after the procedure.

Perforation of the ear drum is a common condition seen as a result of trauma to the ear or as a result of acute or chronic ear infection. Traumatic or acute perforations of the ear drum tend to heal spontaneously within a few weeks. A hearing test is performed to document the degree of hearing loss resulting from a perforation. It is important to keep the ear dry by following dry ear precautions (no swimming, cotton ball with vaseline or ear-plugs placed in the ear during showers). If a perforation does not heal on its own, the ear drum can be surgically repaired by an outpatient procedure known as tympanoplasty. We typically use temporalis fascia (a natural tissue overlying the chewing muscle above the ear) to rebuild the ear drum. Temporalis fascia approximates the natural properties of the eardrum and creates an excellent replacement for the ear drum. The ossicles or hearing bones are inspected at the time of tympanoplasty as well. If the ossicles are found to be diseased or fixed, ossicular reconstruction is performed at the same time.